“so great a cloud of witnesses”

So, Easter was a little over a week ago.  You probably noticed.  Additionally, the high school Bible study that my husband teaches is in the Book of Matthew, and in that study we are closing in on the crucifixion.  So my Bible reading lately has been centered around those pages in the gospels.

In the past few days, I noticed a chart in my Bible that I found interesting.  I have a study Bible, which has dozens of charts and maps and tables, that can be very helpful for making comparisons of facts that are scattered in Scripture, or when visuals are needed.

But sometimes, to be honest, I don’t even notice them.  I’m reading or studying words, I guess, and just don’t glance down there, or whatever’s in that chart or map or table isn’t what’s on my mind, so I just glance past it.

This one caught my eye.  It was a list of everyone who saw Jesus after His resurrection, and I forget, sometimes, how long that list is:

Mary Magdalene and other non-named women ~ although we can probably assume that several of them were named Mary 😉 ~ Peter, then ten of the disciples, and then eleven of them after Thomas joined… then there were the two disciples on the road to Emmaus, and 500 people noted in 1 Corinthians, which also mentions “all the apostles”.

That’s a lot of people, in a lot of different times and circumstances.  But there are still some who deny the facts.  But what would be the reason, of all those witness, to lie?

But a lot of these people endured persecution, and even died horrible deaths, insisting the whole time that what they’d seen was true.  That doesn’t sound like something liars would do.

And I suppose one might believe simply because they desperately want to believe something.  Many of these people had invested their lives in following Jesus.  They had left jobs and homes and families, because they believed in Him.  So maybe there are people who would say something untrue to save face.  To convince their friends and family and anyone who had called them “foolish,” that they hadn’t made a mistake.  But how far would those people have carried it?  If that were me ~ if I, say, espoused a product or a lifestyle that I later found out was fraudulent, or actually harmful, I’d try to put it out of my life.  To pretend it hadn’t happened.

I love the history in the Bible.  I love that it’s not just the ethereal and spiritual and intangibles of God that we are taught, but also people, places and events.  And I love that the authors included dates and rulers and other verifiable facts, that we would know that every word is trustworthy.

But most of all, I love that there were witnesses ~ many of them ~ to the resurrected Jesus.  This amazing, miraculous event is the crux ~ literally ~ of our faith.  And yet, we don’t have to take it on faith.  It makes everything else in Scripture just icing on the cake.  From faith to faith. 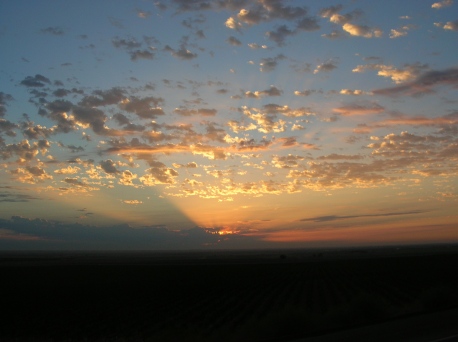 the righteousness of God is revealed

from faith to faith;

as it is written,

Words to Live By…

Fighting the world ~ or your culture ~ or your personal mold is difficult. Sometimes lifelong.